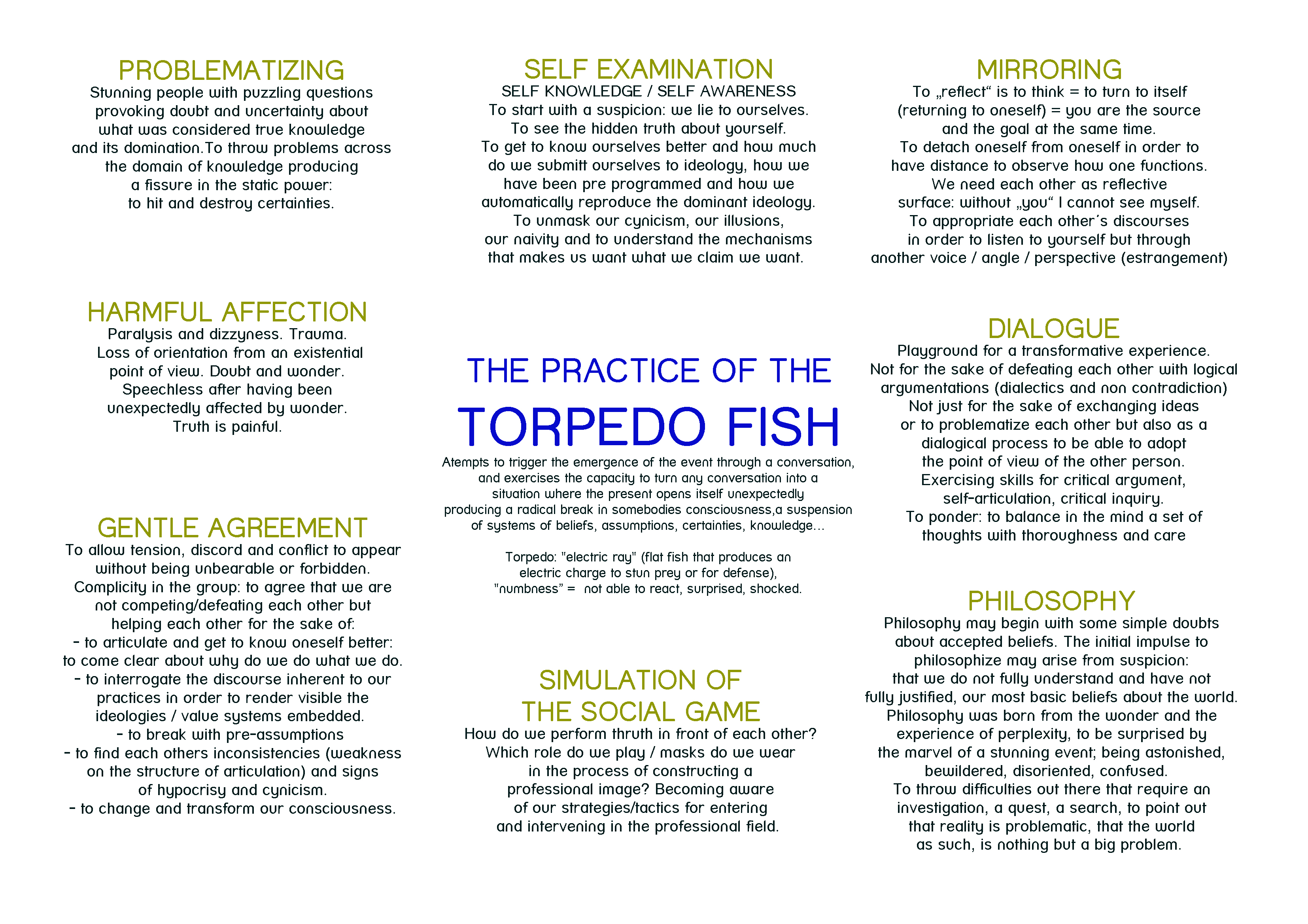 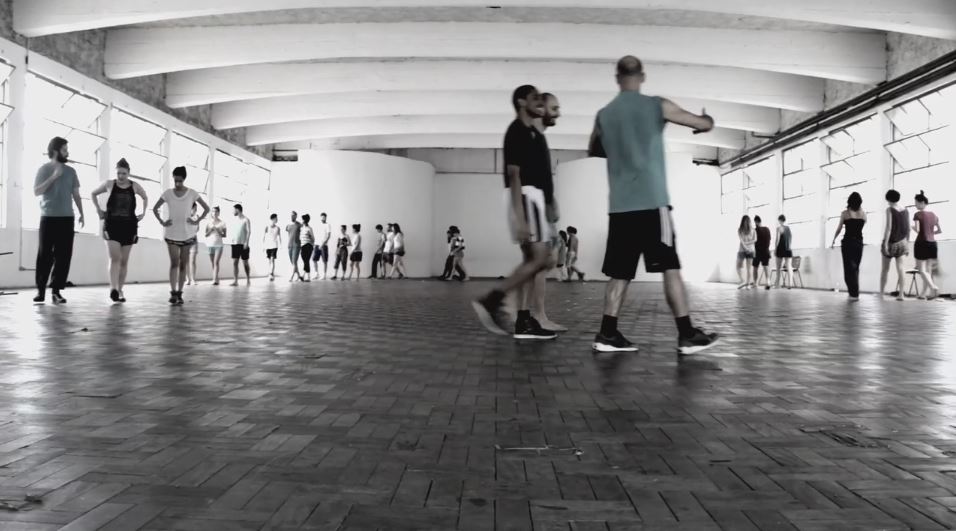 The Torpedo Fish is an exercise that attempts to trigger the emergence of the event through a conversation, or in other words, the Torpedo Fish exercises the capacity to turn any conversation into a situation where the present opens itself unexpectedly producing a radical break in somebodies consciousness, a suspension of systems of beliefs, assumptions, certainties, knowledge…

The Torpedo Fish Exercise from Diego Agulló, Events on Vimeo.

The affinity between philosophy and choreography consists of generating situations of problematic encounters between bodies. Plato wrote theater pieces and the dialogues that can be understood as little dances: situations where problems are thrown in the middle of people´s trajectories producing loss of orientation or paralysis.

Paralysis and dizziness are the effects of Socrates’ invitation to dance. Socrates is inviting us to dance with the problem, or more precisely, to dance the problem. During this problematic encounter of two or more trajectories, there is the risk of losing one´s own trajectory, losing orientation from an existential point of view. What before was certain, now becomes uncertain. Philosophizing may begin with some simple doubts about accepted beliefs. The initial impulse to philosophize may arise from suspicion: that we do not fully understand, and have not fully justified, our most basic beliefs about the world.

The connection between philosophy and a harmful affection actually has been considered the origin of philosophy itself. In Plato (Theaetetus 155d) we can read that philosophy begins in wonder. Theaetetus’s exclamation: by the gods, Socrates, I am lost in wonder (thaumazô) when I think of all these things. It sometimes makes me quite dizzy. Doubt and wonder, not only as the effect of the philosophical exercise but also as what caused philosophy to appear. From the term thaumazein come the terms trauma and wonder, and it refers to the specific pathos of being speechless after having been unexpectedly affected by wonder, being wounded by wonder, by what is beyond words. Usually we call this a state of shock.

Wonder: Old English wundor “marvelous thing, miracle, object of astonishment,” from Proto-Germanic *wundran. In Middle English it also came to mean the emotion associated with such a sight (late 13c.).

With Socrates, philosophy and problems belong together. We can actually understand the work of Plato as a series of problematic encounters or invitations to dance with a problem. Any problematic encounter is always an unexpected invitation to dance. Apparently it was easy to encounter Socrates by chance in any part of the city, on your way to the market or coming back home and better to not bump into him because, as the torpedo fish does, it will hit you and affect you harmfully: you will be paralyzed: you will have a problem. This problem consisted of being invited to a dance that you cannot refuse. For Socrates to philosophize and to problematize is one and the same thing—be it to problematize oneself or others. Due to this „problematic“ specificity of the philosopher, in Plato´s dialogue Meno, Socrates is called the torpedo fish because his practice consisted of “stunning” people with his puzzling questions. A torpedo fish (electric ray) is the electric fish that will paralyze you if you step on it. But torpedo also means projectile. Socrates’ invitation to dance was a very peculiar one, since the invitation to dance ends up in the absence of movement—paralysis. The affects that Socrates produced on the people he would encounter problematized them, in other words, he provoked doubt and uncertainty about what was considered true knowledge and its domination. Looking at Socrates, ballein means to throw problems across the domain of knowledge producing a fissure (doubt) in the static power, in other words, to hit and destroy certainties.

Torpedo: 1520s, “electric ray” (flat fish that produces an electric charge to stun prey or for defense), from Latin torpedo “electric ray,” originally “numbness, sluggishness” (the fish so called from the effect of being jolted by the ray’s electric discharges), from torpere “be numb”. The sense of “explosive device used to blow up enemy ships” is first recorded 1776, as a floating mine; the self-propelled version is from c.1900. Related: Torpedic.

Wonders, wounds, traumas… the practice of philosophy, in order to be born, needs a previous experience of being hit, being affected harmfully: philosophy needs a wound-wonder to exist. A view that is echoed by Aristotle: It was their wonder, astonishment, that first led men to philosophize and still leads them. For Aristotle, philosophy was born from the wonder and the experience of perplexity, to be surprised by the marvel of a stunning event; being astonished, bewildered, disoriented, confused. There is a pathos at the beginning of the philosophical movement, the pathos of suffering a problematic encounter with something beyond words, something that hits you and sets you into motion towards the philosophical quest: the wound makes the philosopher wonder about the entire existence. The whole world becomes a big problem.

Since Socrates, to problematize has been the main task of philosophy, to become the torpedo fish, to throw difficulties out there that require an investigation, a quest, a search, to point out that reality is problematic, that the world as such, is nothing but a big problem. A problem implies that something becomes a case. Philosophy is nothing different from a detective game. Both need a case to be investigated. A detective wishes for the perfect case to solve. When the whole world becomes the case of your investigation, the whole world requires resolution. This is the case of the philosopher-detective: to wonder about everything, to live in aporia, to question everything, to problematize the whole world.

MENO: Socrates, I certainly used to hear, even before meeting you, that you never did anything else than exist in a state of perplexity (aporia) yourself and put others in a state of perplexity. And now you seem to be bewitching me and drugging me and simply subduing me with incantations, so that I come to be full of perplexity. And you seem to me, if it is appropriate to make something of a joke, to be altogether, both in looks and other respects, like the flat torpedo-fish (narkē) of the sea. For, indeed, it always makes anyone who approaches it grow numb, and you seem to me now to have done that very sort of thing to me, making me numb (narkan). For truly, both in soul and in mouth, I am numb and have nothing with which I can answer you. And yet thousands of times I have made a great many speeches about virtue, and before many people, and done very well, in my own opinion anyway; yet now I’m altogether unable to say what it is. And it seems to me that you are well-advised not to sail away or emigrate from here: for, if you, a foreigner in a different city, were to do this sort of thing, you would probably be arrested as a sorcerer. (Plato’s Meno 79e-80b This and future citations will be from the translation of Berns and Anastaplo, Focus Philosophical Library, 2004)