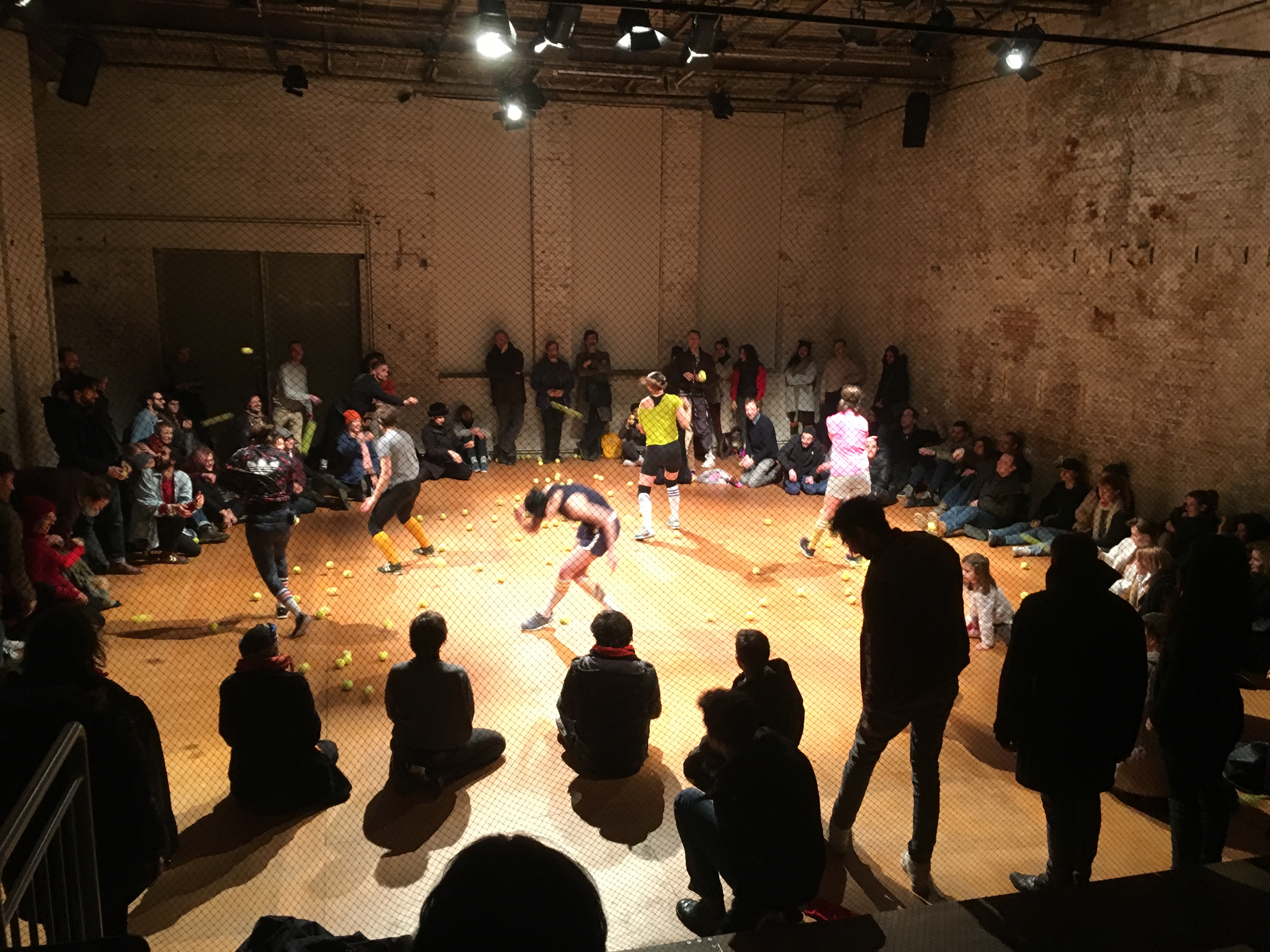 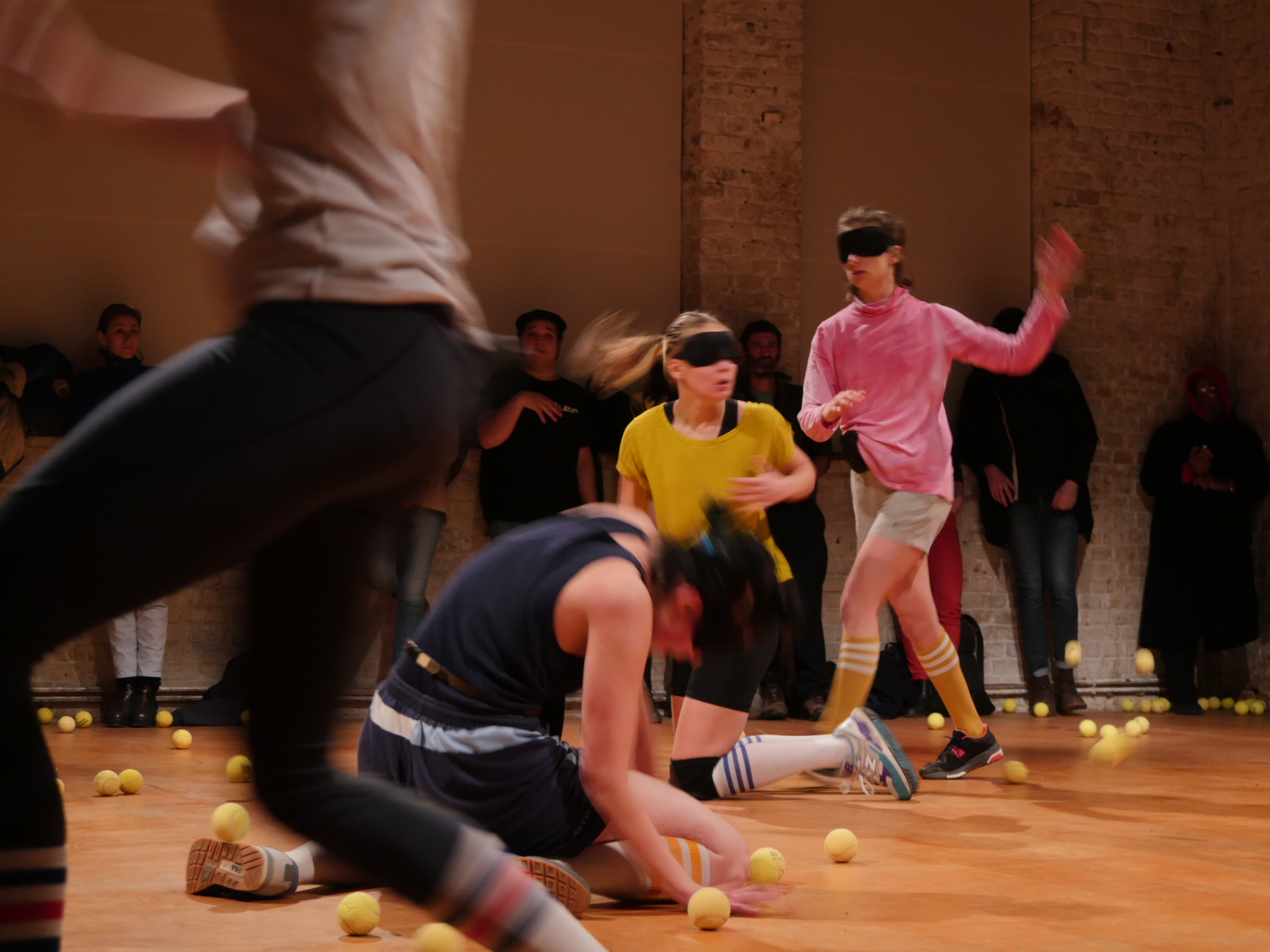 The Awakening of Dance: an Exercise for Throwing Dances

This exercise has been developed since 2013 in different contexts and together with participants from laboratory at LOTE in Sao Paolo, workshop at Teatro Pradillo Madrid, workshop at Smash Berlin,Julia Plawgo and Negroma at Pact Zollverein residency and the research presentation at DOCK 11 in collaboration with Lisa Stewart, Kiana Rezvani, Cajsa Godeé, Fjóla Gautadóttir, Julia Barrette-Laperrière.. The statement behind this exercise is that dance must be forced to happen instead of being the result of a benevolent desire to move. On this exercise you are not going to dance to the music that you like, you are not going to dance your favorite choreographies. On this exercise the dance is not a result of a desire to dance a choreography. You will not dance what you want or like to dance but rather the dance is forced to happen. Without being exposed to danger this dance will never take place.

In which conditions do we dance? What are the circumstances around and how this circumstances makes us dance? How dance can channel the negativity and violence around us?

The power of dance is to channel out the negativity and to turn it into affirmation.

This exercise proposes a dance detonator and it is divided in two parts:

– The first part consist of exposing oneself to danger for the sake of awakening the dance. At least one person in the group gets blindfolded. The ones that are not blindfolded throw projectiles at the blindfolded bodies for at least ten minutes. The projectile must be thrown with enough strength (the impact on the body has to be painful). An example of projectile can be tennis balls. The balls must be thrown with strength aiming to impact at any body part, the only requirement is to keep a certain distance between the person who throws and the person who is blindfolded to avoid throwing from a close distance. People can throw as many balls as they wish during the time proposed.

– Second part: people stop throwing projectiles and the blindfolded ones explore for at least ten minutes the resonances that have been embodied during the first part. The task is to come up with a dance that is not any longer a reaction of a traumatic body being exposed to danger but rather it became an affirmative force.

Make sure that despite of all the moral or ethical concerns that might appear in the group, it is necessary to throw the projectiles, they are nothing else than an invitation to dance. What comes next is a problem that must be danced by everyone. 10 minutes is actually a long time and it is in your hands to decide the intensity of this choreography. You are part of the dance too. You can always apply a sense of rhythm and to be aware of the pauses and intensities of others peoples throws. On the other hand, the people blindfolded can work with the input of the hit in their bodies and also with the situation of being exposed to the possibility of getting hit which implies capacity of anticipation and protection, such as moving fast and in an unpredictable manner. The blindfolded people can’t see who throws at them: they don´t see the author of the attack: it does not become personal.

The people who throw are in power but the dancer is is power too because they can instrumentalize the throw (the attack) turning it into an invitation to dance.

The exercise can be developed as movement research establishing a common quality on the physicality of a collective body.

This exercise can be presented in public. The audience members are requested to throw the projectiles at the performers. Everyone in the group gets blindfolded. They all carry a device that plays sounds or music (to be determined). This way, the bodies are sending signals of which location do they occupy on the space. Everyone throws projectiles at each other guessing by the sound where the target is located. Notice that many projectiles will be needed since nobody can see where the projectiles are situated on the floor.
This exercise can be presented as a durational installation where the audience are exposed to the danger of getting hit by the blindfolded performers.

Special thanks to everybody participating in the development of this exercises since 2013 in different contexts such as the laboratory at LOTE in Sao Paolo, the workshop at Tatwerk Berlin, the workshop at Teatro Pradillo Madrid, the workshop at Smash Berlin, the residency together with Julia Plawgo and Negroma  at Pact Zollverein and the research presentation at DOCK 11 in collaboration with Lisa Stewart, Kiana Rezvani, Cajsa Godeé, Fjóla Gautadóttir, Julia Barrette-Laperrière.